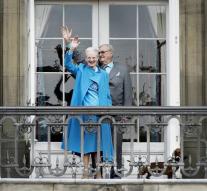 copenhagen - The Danish prince Henrik will not be buried next to his wife, Queen Margrethe, after his death. The aristocrat is dissatisfied because he himself has never been seen as the equal of his wife. Henrik has repeatedly stated not to be happy with his title Prince-Gemaal; He would rather be called king-consort.

The spokeswoman of the Royal House confirmed Thursday that the 83-year-old prince does not want to be joined by Margrethe (77). 'His decision not to be buried next to the queen is the logical consequence of the fact that he was not treated as his wife's equal: he did not get the title and role he wanted. '

Queen Margrethe is expected to be buried at Roskilde Cathedral after her death. It is still unclear what the last resting place of her husband should be. Henrik left the title Prince-Gemaal last year. He has spent a lot of time at his vineyard in France.