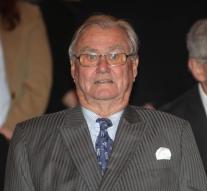 copenhagen - The Danish Prince Consort Henrik loves the royal ceremony before seen. The 81-year-old husband of Queen Margrethe is as of January 1 officially retired, as announced Thursday by the Queen in her New Year's speech, which was broadcast live on TV.


,, The prince will have only very limited part in official events. I understand and respect his decision and thank him for all the support, help and inspiration he has given me all these years, Margrethe said.
Henrik, born in France as Henri Marie Jean André Count de Laborde the Monpezat, is known that he hated court life, because he felt like prince consort subordinate to his wife. He often held long holidays in France, including at his vineyard in the south of the country. The Danes never been entirely positive about the prince.
NEW