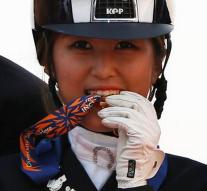 seoul - The Danish police have arrested Chung Yoo-ra. She is the daughter of Choi Soon-sil, a friend of the controversial President Park Geun-hye of South Korea. A South Korean court issued recently an arrest warrant for Chung, partly because she is suspected of obstruction of justice.

' We are going to submit an extradition request for Chung in Denmark, 'said Lee Chul-sung, commissioner general of the National Police in South Korea.

Chung, a 20-year-old competition rider who is trained in Germany, has been arrested in the northern Danish city of Aalborg. Lee Kyung-jae, both Choi and Chung's lawyer, said that Chung will cooperate with the investigation.

Her mother Choi sits behind bars. She plays a key role in the scandal surrounding President Park, deposit hanging overhead. Park can not be prosecuted because of her presidential immunity.

Prosecutors suspect Choi, inter alia, to have put under pressure to donate money to two foundations that were controlled by it. they would have exerted behind the scenes influence on government policy.