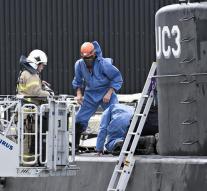 copenhagen - The Danish police know the identity of the woman whose hull was found Monday evening on a shore of the island of Amager. It is awaiting the result of the DNA research that has to make it clear whether it is about the missing Swedish journalist Kim Wall. 'We expect the outcome on his earliest Wednesday,' said police spokesman Jens Møller Jensen in a video message on Twitter.

It has already been established that the head and limbs are deliberately separated from the body. Divers have searched the waters southwest of Amager all day, but no other physical remains have been found so far.

Kim Wall was last seen on August 10 when she boarded the submarine of Danish engineer Peter Madsen, who wanted to write a story. He told her that she was killed by an accident in the submarine and that he gave her a seaman's grave. Earlier, Madsen said the Swedish had already deposited on an island in Copenhagen harbor. He is stuck on accusation of death by serious negligence.