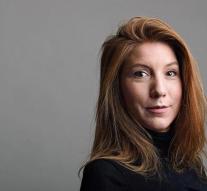 copenhagen - The Danish diveboat owner arrested in connection with the disappearance of the Swedish journalist who was last seen on his crafted submarine, admits that she was killed on his vessel by an 'accident'. He told the police that he buried her at sea near Copenhagen.

That reports Daily Mail. The Danish diveboat owner was previously accused by death of serious negligence.

Danish and Swedish authorities have identified the waters along the coasts of the two countries over the past ten days in the search for the body of women. With the new statement, the police hope to speed up the search.

The 30-year-old Swedish was last seen almost two weeks ago. She spent the night aboard the private submarine of the arrested Deen. Since then, every rail has been missing in spite of the massive search that is taking place in the waters between Denmark and Sweden.