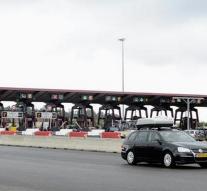 copenhagen - The Danish government is considering introducing a toll charge for foreign motorists. That's what the treasury must pay about 40 million euros per year, according to Ritzau press office.

Foreigners should pay around 130 euros annually to drive on Danish roads. This scheme could come into force in 2020.

The inspiration for the plan is from Germany, where the introduction of such a system is not undisputed.