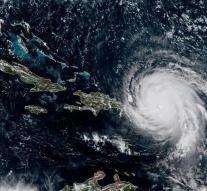 san juan - Hurricane Irma has left a trail of destruction on the Caribbean island of Barbuda.

That said Prime Minister Gaston Browne of the country of Barbuda and Antigua. He announced that damage was inflicted for around 125 million euros.

'The reconstruction will take years,' said Browne. He added that the hurricane in Barbuda has certainly demanded one life.