Home / World / 'Damage through Florence runs into the billions' 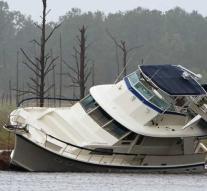 miami - Because of the hurricane of Florence, large parts of the southeastern coast of the US have come under water. Chuck Watson, a disaster expert from a research institute in Georgia, said the damage could amount to about $ 20 billion (more than EUR 17 billion).

The hurricane killed at least five people. The White House said that President Donald Trump agreed to make available federal government money for a few affected districts. The president wants to visit the area next week.

The passing of Florence was accompanied by heavy rainfall. Rivers came out of their banks and many fields of agricultural crops must be considered as lost. Larry Wooten, president of the North Carolina agriculture agency said that half of the tobacco plants in North Carolina were still in the field and 'basically destroyed, blown away. '