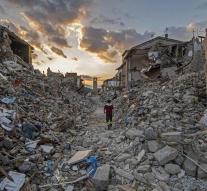 rome - The damage caused by the earthquake last month in central Italy, is estimated at around 4 billion euros. But the affected citizens can be confident that everything will be as it was, assured Prime Minister Matteo Renzi Friday.

More than 2,500 people are still in tents. Likely to move many coming weekend for a comfortable accommodation, the Civil Protection promised. The mayor of the ravaged Amatrice will if necessary post tent occupants in hotel rooms. There is also hardly begun when, for the fall. In the Apennines can even quite snow in October.

The next seven months rise shelters, which must accommodate the affected residents until they can reoccupy their own homes. Authorities say then want to start as soon as possible with reconstruction. Many earthquake victims, however, take the promises with a grain of salt, with the still unfinished reconstruction of the devastated L'Aquila in mind in 2009.

The new houses for the victims to be built earthquake resistant, said the coordinator appointed by the government for the job. According to experts, it lacked the buildings collapsed in many previous month. There is a criminal investigation into possible violations of building codes.

The earthquake, which took 297 people died, took place this weekend exactly a month ago. The earth is still unsettled in the disaster area. In the night from Thursday to Friday there again felt aftershocks.