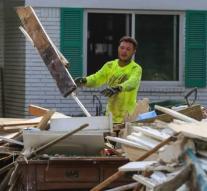 Abbott gave the estimate in an interview with Fox news channel. According to the governor, the area and group of people affected by Harvey are far greater than in Katrina's hurricane disaster in 2005. Katrina's damages amount to more than $ 120 billion, according to Abbott. President Donald Trump asked Congress to request nearly $ 8 billion in emergency aid.

Harvey was the toughest hurricane that struck Texas in half a century and committed tremendous damage to tens of deaths. Especially in and around the city of Houston large wrecks were inflicted as a result of floods.