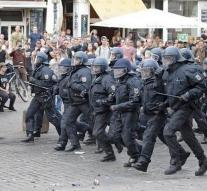 hamburg hamburg - The riots around the G20 summit in Hamburg have resulted in a loss of EUR 12 million. That's what German insurers calculated.

About one third of that amount is damage to cars. The rest are destructions that were inflicted on homes and businesses.

During the top one and a half weeks ago, there were three days of riots in the streets of the North German port city. Anti-G20 activists cast barricades in various places. They stalled cars, robbed various shops and bombed the police with stones and bottles. In the conflicts between demonstrators and the police, 231 police were injured. How many activists injured injury is unknown.