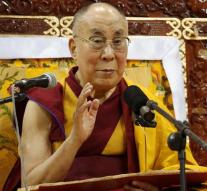 ulaanbaatar - The Tibetan spiritual leader Dalai Lama will meet with the US president-elect Donald Trump. This encounter between Trump and the monks would set bad blood in China, which sees the winner of the Nobel Peace Prize as a dangerous separatist.

During a visit to the Mongolian capital of Ulan Bator told the Dalai Lama that he United States has always been considered 'a leading nation of the free world. 'He also said:' During the elections, the presidential candidates have a lot of freedom to say what they want. But once elected, they have the responsibility to translate their vision into reality. '

President Barack Obama has in the past eight years, four times met the exiled spiritual leader. The last time was in June, despite a warning from China that it would jeopardize diplomatic relations between the United States.