Home / World / Daily Mail has backed down to Trump lawsuit 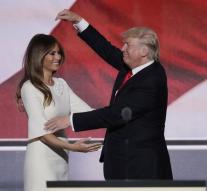 - The British Daily Mail has withdrawn an article in which the wife of US presidential candidate Donald Trump was staged as a former escort. The publication of the document is likely to come to be the tabloid expensive. Melania Trump has gone to court and claiming damages of $ 150 million.

The Daily Mail and the American blog Tarpley wrote that Melania Trump in the nineties in Milan and New York, had worked as a maid of fun.,, Those assertions are one hundred percent false and damaging its reputation, '' said her lawyer.

The British tabloid has since withdrawn the offending article,, so far as it was interpreted as a statement that Ms. Trump was working as an escort. ' The Mail expressed its regret that the piece was conceived as. In the article the Trump camp had plenty of space to contradict the allegations and the author mentioned that there was no evidence, says the editorial. Which nevertheless decided to place because the allegations however have an impact on the presidential election.