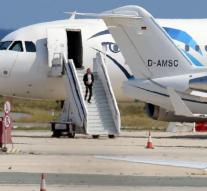 - A court in Cyprus on Friday ordered the deportation of an Egyptian who hijacked a passenger plane in March with a nepbomgordel.

The 59-year-old Seif Eldin Mustafa could not convince the court in Nicosia that he would not get a fair trial in his home country, reported the semi-state news agency CNA.

Mustafa hijacked in March, a domestic flight with 72 passengers and allowed the pilot divert to Larnaca. There he let the passengers and crew in groups and he surrendered after six hours over to the authorities. A passenger was selfies with the hijacker and placed it on social media. Mustafa asked for the release of female prisoners in Egypt and wanted to get in touch with his Cypriot ex-wife.