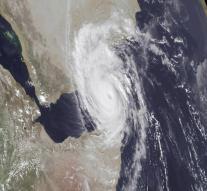 aden - A rare tropical cyclone pulled over Tuesday Yemen, has claimed the lives of eight people. The storm was the worst endured the country in decades.

The cyclone caused Chapala days long flooding in the area, which were the most victims.

The UN relief agency OCHA reported that 36,000 people have had to find shelter in public buildings or with acquaintances. " Humanitarian aid is hampered by the insecurity that has to do with the conflict in the country and because a large part of the affected area is in the hands of al- Qaeda. "

Monday attacked all three victims on the island of Socotra. Aid organizations want to bring food and tents to Socotra.