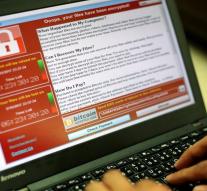 the hague - Friday's attack with ransomware, so-called hostage software that encrypts files on computers and releases release for payment, shows how vulnerable the computer world is. That said Ronald Prince of security company Fox-IT Saturday. The spread of the virus has stopped since Friday night.

'The attack shows that it is quite simple to lame large networks. The Netherlands is the most digital country in the world and is therefore extremely vulnerable, 'said Prince. He calls for a new cabinet to take 'cybersecurity' seriously. 'The Netherlands now publishes 100 million a year. That is nothing compared to other countries. Great Britain, for example, is at the forefront and issues 6.5 billion euros. '

Out of 75 countries, reports of victims were reported by ransomware. There are still no Dutch reports, according to Prince Saturday morning.