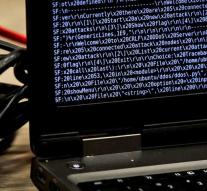 berlin - Germany has suffered more than EUR 43 billion in damage over the past two years due to cyber attacks. Companies became victims of sabotage, data theft and espionage. That certainly happened to seven out of ten companies, and in another two out of ten companies that suspicion exists.

The German IT sector, Bitkom, has conducted research among more than five hundred large companies in Germany. 'With all its market leaders, the German industry is very interesting for criminals,' says Bitkom. According to the German internal security service, the 'illegal transfer of knowledge and technology' and other forms of crime are not a few cases, but it is a 'mass phenomenon. '