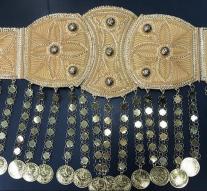 dusseldorf - The German customs seized a traditional gold-plated wedding belt from a Dutch traveler at the Düsseldorf airport. A customs keeper found the valuable icing in the bag of a 28-year-old woman who arrived with Turkey's husband and child, reported the Rheinische Post on Friday.

The belt would be worth 30,000 euros and the woman is now being accused of tax evasion. The German customs claim that tax has been deducted for 6500 euros. Because travelers did not live in Germany and did not have enough money for a deposit, the jewel was seized. A gold ring that was also found could be taken home in the Netherlands.