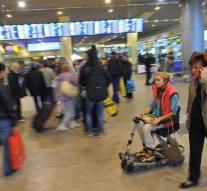 moscow - Customs at Domodedovo airport in Moscow have arrested a woman who wanted to enter the country with an exclusive ring on her finger. The gold ring was set with diamonds, sapphires, tourmalines and emeralds. The value of the jewel is converted 522,000 euro. The bill presented for import customs, amounted to 127,000 euros.

The woman, who had arrived from Munich, said that the special ring was a gift from her husband, bought the famous jeweler Van Cleef amp; Arpels. That was the customs officer fine, but he still is reflecting on whether the woman is formally accused of evading import duties on a large scale. ' Those found guilty of it, can turn into the cell for five years, reports the Moscow Times.