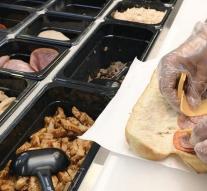 cleveland - A customer who visited a fast food restaurant in the US Cleveland was so angry with anyone who had ruined his sandwich sandwich that he threatened to shoot someone in the kitchen.

The South Euclid Police Department had received a phone call about a man who was 'completely disturbed' a steak shake restaurant, with a gun in his hand. He threatened to knock down someone. The man was charged by the police.

The 20-year-old complainant had complained about the egg on his sandwich (liquid and slimy) and was so bewildered that he had decided not to help it.

According to ABC News, the man is charged with a threat and waits for a lawsuit.