Home / World / 'Curaçao is down by strike' 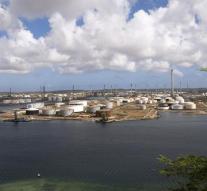 - "By a general strike, all schools closed in Curacao and is not working in many companies and government agencies. The power is out in many neighborhoods, making Internet is impossible. Thursday appeared part of the employees of the energy company Aqualectra not at work."

"The big question is whether this strike, in which 23 participating unions will proceed peacefully. Whether one refers to the call by Prime Minister Ben Whiteman Tuesday on national television to adhere to the ban on assembly in the wind? Already was an old theater building in flames and cease trade unionists cars on fire."

"Since the trade union demonstration in 1969 completely out of hand ran in Willemstad, a large part of the center went up in flames, there is nervousness over big strikes. Even the strike began disgruntled oil workers."

"\"The police are alert and full strength,\" said spokesman Imro Wanderer. \"If it gets out of hand, we have enough people. \"Even Defence on the island is ready to possibly assist if the government requests it Curaçao."