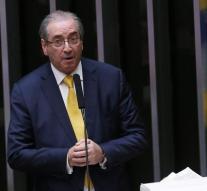 - "Eduardo Cunha, the man who as president of the Brazilian House of Representatives was the driving force behind the impeachment against President Dilma Rousseff, to relinquish his parliamentary seat. He has kept secret that he was afforded, Swiss bank accounts."

"450 members of parliament voted for his expulsion, only ten people were against."

"Cunha has threatened numerous colleagues to drag into his trap. He wants in return for a reduced sentence open a window on the corrupt practices of other parliamentarians and government ministers. About three out of five members of the House of Representatives are the subject of judicial investigation, Transparency International reports."