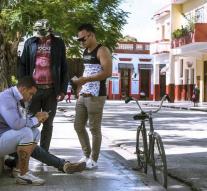 havana - Who sends an SMS in Cuba, can be assured of the interest of the government. Dissidents claim that the authorities monitor all text messages. Posts containing words such as democracy, human rights and prevent hunger strike are blocked.

The well-known blogger Yoani Sanchez and the journalist Reinaldo Escobar concluded after investigation that text messages are filtered by telephone on several words. Also text messages with the names of dissidents do not reach the intended recipient. Authorities block the message immediately. Long Cubans assume that the providers were incompetent went but research notes, however, direct intervention by the government.

The Cuban state agency for telecommunication ETECSA Monday declined to comment on the allegation. Cuba has around 12 million inhabitants, which have 3 million mobile phones. About a quarter of Cubans have access to the Internet, usually through Wi-Fi.