Home / World / Cuba remains behind with trace of destruction 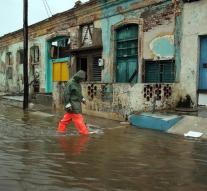 havana - The path that Hurricane Irma followed along the north coast of Cuba remained full of devastation. The water in the Gulf of Mexico was swept up and washed far into the streets of the capital of Havana. Along hundreds of miles of seawater sea water penetrated the country.

There are few official data about victims. However, the US news station CNN reports 24 kills on the elongated Caribbean island. Thousands of inhabitants of the coastline were brought to the shelters by the army. The government also released about 5,000 tourists from the hotels and resorts along the coast to safer places.

Immediately after the worst was over, the army came into action to re-launch the power supply strike on many places and make the roads off the coast free from rubbish. Many houses in the coastal strip have lost their roof. According to The Guardian, only 39 homes in the city of Santa Clara have collapsed under natural violence.