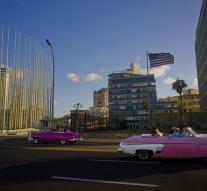 havana - Certainly five US diplomats stationed in Cuba have become deaf in recent months. In some cases the hearing loss was so severe that they returned to the US in the meantime.

Anonymous diplomatic sources report to Associated Press press office that ultrasound is presumably the cause. A device that emitted this inaudible but harmful sound was probably near or even in the residences of diplomats, according to research.

It is not yet known whether the device has been intentionally deployed or there is an unfortunate collapse of circumstances. And if it's a targeted attack, it's not clear whether Cuba is behind it or another country. The researchers do not rule out Russia's involvement.

Regardless of whether Cuba is guilty of deafness, the US is at least responsible for the island state. That's why, in May, two Cuban diplomats in Washington have been declared persona non grata. Cuba is angry about it. 'The expulsion is illegal and nowhere based', was the response of the Cuban Ministry of Foreign Affairs. Cuba itself has launched an investigation into the deafness mystery.

The US Department of Foreign Affairs leaves little attention to the issue. It merely wants to confirm that US diplomats have left 'physical complaints' on their stay in Cuba without giving in detail, and that Cuban diplomats have been deployed. Associated Press claims that the surveillance of the US embassy in Havana and the residences of diplomats has been stepped up.