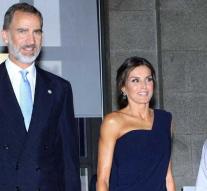 - The Cuban government wants to get more clarity next week in the corridors of the General Assembly of the United Nations by the new Spanish Prime Minister Pedro Sanchez about a state visit by King Felipe and Queen Letizia to Cuba.

The previous Cuban president Raúl Castro has already invited them in 2016, but so far it has not yet come to a visit. According to Cuban media, it was the Spanish Prime Minister Mariano Rajoy, who resigned earlier this year, who held a state visit by Felipe. Spanish companies have been lobbying for a state visit in Madrid for some time. Spain is one of the largest foreign investors and there are also many Spanish companies active in Cuba.

Rajoy, however, did not think it would be a good idea to visit Raúl Castro, but now that the new generation is in power in Cuba in the person of President Miguel Díaz-Canel, the cards are different. A new prime minister in Spain and a new president in Cuba, that should be a new start, says observers in Havana. They also hope for a meeting in New York between Sanchez and Díaz-Canel.

Felipe's father, King Juan Carlos, has been to Cuba twice, but not to a state visit. In 1999 he attended the Ibero-Latin-American top and in 2016 he was present at the funeral of Cuba's leader Fidel Castro.