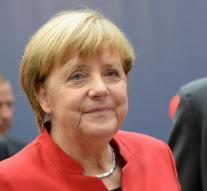 - The Bavarian CSU party will support the German Chancellor Merkel if she wants to become prime minister for a fourth term. With that stance seems to have come to an end to the disagreement between the CSU and Merkel on refugee policy. 'Angela Merkel is our candidate,' a party spokesman told Spiegel.

Merkel chancellor since 2005 and has so far not indicated whether they will again for election next year.