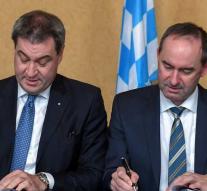 munich - The Christian Democratic CSU and conservative Freie-Wähler (Free Electors) have signed the first black and orange coalition in Germany in the South German state of Bavaria. He will be led by Markus Söder from the CSU who will be sworn in as prime minister of the state government on Tuesday.

The CSU lost the absolute majority in parliament three weeks ago and was forced to form a coalition after years. After the hard stance in the election campaign against the far-right Alternative für Deutschland, Free Voters were the most logical partner. He gets three ministers and two state secretaries in the Bavarian government.