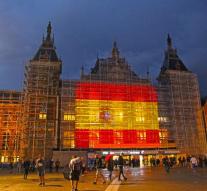 amsterdam - The Central Station in Amsterdam is lit in the colors of the Spanish flag on Friday and Saturday nights. Furthermore, the flags on the city hall of the capital are semi-logged.

In addition, Mayor Eberhard van der Laan has sent a condolence letter to his colleague from Barcelona, ​​Ada Colau. Van der Laan offers its condolences and sympathy on behalf of the city council and all Amsterdam residents. 'Our hearts and thoughts are with the people of Barcelona and Cambrils who have been affected by these cowardly deeds. ''