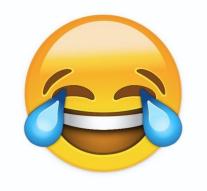 - Oxford Dictionaries this year no word chosen as word of the year, but a emoji.

It is the ' cry-of-the-laughing-smiley ' which lately is very popular in chat apps like WhatsApp and Facebook Messenger. The jury reflects " the morals, the mood and the preoccupation of 2015.

" The use of emoji became so popular that individual characters all their own trends and stories developed, " says Oxford Dictionaries director Casper Grathwohl told the BBC.

Other contenders this year were ' Grexit ', a British exit from the European Union and " Lumber Sexual ', used to describe a young man with a beard and diced shirt.

Another striking thing was shortlisted ' they ', but in the singular to refer to someone one does not know the sex.