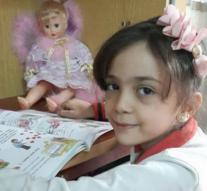 aleppo - A seven year old girl who attracted worldwide attention with tweets from the Syrian city of Aleppo, some time disappeared from Twitter. When the account of Bana Alabed Monday was reactivated, the child's mother put a chilling cry.

' We are attacked. We can go anywhere. Every minute feels like death, '' mother wrote Fatemah. ' Say a prayer for us. Bye. '' A source on Monday had told the BBC said that the girl and her mother are safe in a secret location.

The twitter account of Bana Alabed was removed Sunday, when government forces moved farther. That led to some concern among its more than 200 000 followers on the messaging site. They reacted under the hashtag #WhereIsBana the disappearance of the account.

The girl described the last few months with the help of her mother in English life in the besieged city. She told include how her house was bombed and that they seem to have seen. The tweets caught the attention of writer JK Rowling, the Syrian girl sent a digital version of her Harry Potter books.