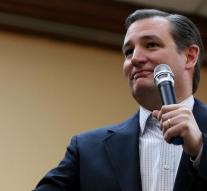 casper - Republican presidential candidate Ted Cruz on Saturday won the primaries in the state of Wyoming.

Cruz gathered all fourteen delegates and comes to a total of 559. His opponent Donald Trump has 196 electoral votes more. In July, at the convention in Cleveland in 1237 delegates needed to secure the nomination for the Republican presidential candidate.

Bernie Sanders won a week before the elections the Democrats in the US state of Wyoming. His rival Hillary Clinton, however, still has a strong lead in electoral votes by Sanders and remains favorite for the overall victory for the Democratic presidential nomination.