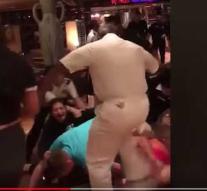 melbourne - A cruise ship with a large family fighting for days on end, is docked in the Australian city of Melbourne. The 23 family members have been put on board.

Passengers who had boarded an idyllic holiday in the South Pacific described three days of chaos. The amok started in the night from Thursday to Friday in a nightclub. Since then, according to the passenger, the 'large Italian family' attacked other passengers.

'Very violent,' she said to the Australian edition of The Guardian. The family would have squeezed the throat in people and beat them.