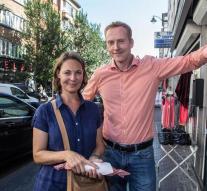 - Dutchman Unico van Kooten had after the attacks in Brussels abdomen completely full of Islamic terrorism. He wanted to do something positive. For Molenbeek. His goal: a Cruyff Court

'You put a wall of prejudice, anger and fear. I did not, 'he says. Van Kooten, from Brussels since 2004, went to Molenbeek, where he had never been to organize a football match between the expat community and a team from Molenbeek.

Now, together with his Amsterdam companion Ahmed Larouz he is busy with arranging what a truly tangible project should be, the Cruyff Court, a field where the youth solidarity must work according to the fourteen principles of the greatest footballer Netherlands has ever known.

'Sport Values ​​are universal. The aim is to socialize people faster, 'Van Kooten. The first money it should be as far into next year.

There are more Dutch pulling towards the problem area. Businesswoman Florence Hoevers is busy setting up a business. B Sprouts should help entrepreneurs get started. 'This is so close to the center. All cultures come together and that is something that we want to convey in our company. 'That rents in the popular district more than half lower than in the center saves course.