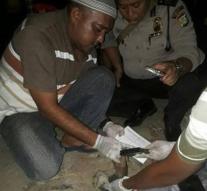 jakarta - A 30-year-old man was resounded in Indonesia because he had stolen an amplifier from a mosque. He was caught on trial, police reported Thursday, and then chased through the streets of Jakarta.

The angry mosquitoes escaped and beat him when they caught him. Then he was poured with gasoline and burned. He succumbed to his injuries.

In Indonesia, people are more likely to play their own right, partly due to lack of confidence in the police and justice.