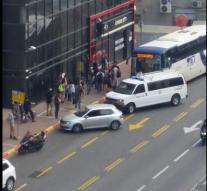 - The Israeli city of Tel Aviv on Wednesday startled by a stabbing incident in which a Palestinian wounded five Israelis in the center of town.

The Palestinian lit a millitair and four civilians down with a screwdriver and then fled. During his flight he was slain by a militair. The stabbing is the fifth incident in Israel since Wednesday, which is facing growing tensions in the Western Bank - some say there would be a 'Third Infitada'.

The perpetrator was from a Palestinian come refugee camp near Jerusalem and had not previously been in contact with police or justitie. Israel media speculate plenty about the t-shirt that had on the offender, where in large letters "time Will Heal All wounds [ time heals all wounds ed ]" stood up.