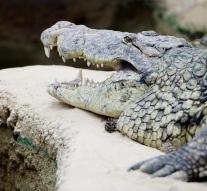 - In a school in the Australian Humpty Doo, near Darwin, three saltwater crocodiles are found. The reptiles were dehydrated, emaciated and their mouths were taped with tape, Australian media report.

After studying video footage showed that four young men had unleashed the beast in the school. Police Darwin is a search started for the perpetrators. In Australia there is a fine up to 50 000 Australian dollars (33 700 euros) to such cruelty.

Using a local ranger caught crocodiles and they are cared for. The largest of the three crocodiles was two meters long.