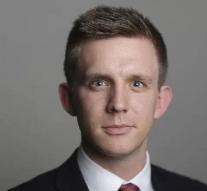 arugam bay - Paul McClean, a 25-year-old journalist, was drawn into a lagoon in Sri Lanka by a crocodile.

The Sri Lankan army and the local police were looking for his body. Dikers eventually found him in the mud. He had six to seven good bites on his leg.

McClean was on holiday with friends as he escaped from the group and was looking for a place to wash his hands. He came across Crocodile Rock, a lagoon allegedly creeping from the crocodiles.

A local fisherman saw Paul waving his hands waving while pulling the water, writes The Guardian. According to the owner of a nearby surf shop, the most unusual: Sri Lankan crocodiles are almost never near the beach, as the salt water makes them blind.

The chief editor of The Financial Times says in a reaction to be shocked by the death of the promising journalist who only worked for two years for the newspaper. Paul graduated from French and was specialized in stories about the Brexit.