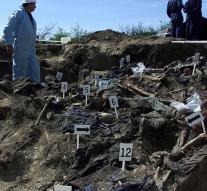 vukovar - Tens of thousands of people Friday in Vukovar in eastern Croatia commemorates the greatest battle of the Civil War of 1991-1995. Led by the head of state and government they marched through the streets of the once destroyed and later rebuilt city on the border with Serbia.

Twenty-five years ago a few thousand lightly armed Croats defended the city in vain against airplanes and tanks supported supremacy of tens of thousands of Serbian soldiers. In the battle killed at least 2,000 civilians were killed. After their victory, the Serbs took more than two hundred wounded Croats from the local hospital, which were then killed in the nearby Ovcara pig farm.

It was one of the greatest crimes of the civil war. Croatian media pointed out that those in charge only a small number are punished. The Serbian government newspaper Novosti stated that 'the tragedy has begun with Serbian victims. '