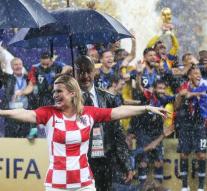 amsterdam - They remained upright on the field, but the French world champions melted away one by one at the intimate embrace of Croatian President Kolinda Grabar-Kitarovic. In the case of a hugely embarrassing bosom shirt, they could not help but embarrass the courageous head in proper respect for so much honest enthusiasm. A stark contrast with which she put cool fool Putin, who stood in the rain for a long time as a true gentleman, under the umbrella. You have to be the winner if you 'celebrate' your loss.

The enthusiasm of the 50-year-old mother of two had already been noticed in the stands. Between the usually stiff-up, usually male leaders, she formed an explosion of uninhibited enthusiasm and patriotism of the innocent kind, not unimportant for a president of a country that was formed after the bloody civil war that Yugoslavia sets out. The Croatian First Lady threw a dance, jumped up and was so enthusiastic that even the not so cheerful Russian Prime Minister Medvedev laughed about it.

The Croatian players were able to do that, every time the mother of the fatherland, after another grueling won party, won the party in the dressing room. Her special bond with star player Luka Modric became clear after the lost final when she quickly wiped a tear from his face, before he had to or should believe in the embrace.

With so much display of love, French President Emmanuel Macron could not stay behind. As if he were the referee in a boxing match, he lifted the blond's hand as winner afterwards.

The fact that the drenched Kolinda Grabar-Kitarovic felt like a fisherman of a tiny country like a fish in the water surrounded by world leaders is not as astonishing as it seems. She speaks fluent English, Spanish and Portuguese in addition to her mother tongue and can reasonably save herself in German, French and Italian. Before being elected president of her country in 2015, she held various positions in international diplomacy. She was ambassador for her country in the US, where she once studied, Minister of Foreign Affairs and Assistant Secretary General of NATO. As president she said she hopes that Croatia would become as rich as leading EU countries.

Her sudden renown caused a remarkable change of personality during the World Cup. On social media photos of a blonde with a well-filled bikini appeared with as caption this is the president of Croatia! Probably she will have ridiculed that comparison jovially. It was the glamor model Coco Austin from the USA, married to rapper Ice-T.