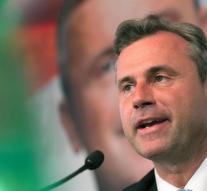 - The Austrian presidential candidate of the right-wing populist Freedom Party does not need to rely on the support of the Protestant church. Norbert Hofer Monday on the fingers was tipped over by the church because he was the phrase 'so help me God' used on his election posters. According to the church contrary to the positions of the FPÖ against the principles of Christianity.

'God can not be used as a tool to implement your own ideas or for political purposes,' the church said in a statement. 'We do not interfere with party politics, but if Christian principles are violated, we must take a stand,' Thomas added Hennefeld of the Protestant Church added. 'We stand for a biblical understanding of God, a universal God who is there for the weak, the strangers, the refugees. The opposite of where the Freedom Party stands for. '

It does not appear that the FPÖ will lie awake criticism. Party leader Heinz-Christian Strache stressed that the phrase 'so help me God' is also part of the oath that makes a new president.