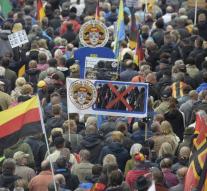 dresden - In Germany fuss made about the tolerant attitude of the police in Dresden against the supporters of Pegida. It's about the celebration of German Unity Monday, said police would hardly have occurred to aggressive Pegida supporters.

Criticism of the lack of police intervention was high on Tuesday after also politics in the state of Saxony interfered with the allegations. While leftist demonstrators were addressed, the police showed Pegida untouched, as claimed, inter alia, the SPD and the Greens. A police officer Pegida the protesters would even have a successful day ' 'desirable.

The interior minister of Saxony increased police protection. He found that the agents just had occurred 'instinct'.

Pegida turns since the end of 2014 against the Islamisation of Western Europe and the advent of economic refugees.