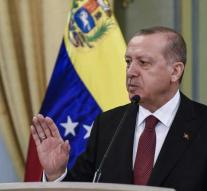 istanbul - The Turkish president Recep Tayyip Erdogan thinks that the police in Paris and Brussels, for example, have been guilty of 'excessive violence' against the demonstrators in yellow vests. He said that the chaos rules in Europe, especially in Paris.

The Turkish president said that with the approach of the demonstrations of the 'yellow vests' it has been shown that there is much wrong in Europe in the field of 'democracy, human rights and freedom'.

Earlier, several European countries criticized Erdogan for suppressing the opposition in his country.