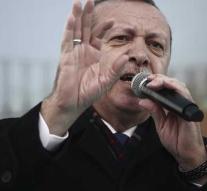 strasbourg - Turkey is becoming increasingly distant from the European Union. The accession negotiations are therefore still in the refrigerator, but the European Commission does not advise to end the talks in its annual progress report. However, Ankara has to lift the state of emergency 'without delay'.

After the foiled coup d'état of 2016, Turkey saw a sharp decline in basic freedoms, independent justice and the reform of public administration, according to the committee. The mass layoffs and arrests of alleged opponents of the government are of great concern, as is the curtailment of basic rights. Turkey does receive a compliment for the economic performance and the reception of almost 4 million refugees.

Member States are unwilling to take a final decision from the negotiations, partly because of Turkey's interest in migration and counterterrorism.