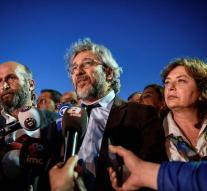 - Can Dündar, editor of the critical Turkish newspaper Cumhuriyet, has resigned. He writes that Monday in his column in the newspaper.

Dündar was sentenced in May to five years in prison because he had published secret documents about Turkish weapons to Islamists in Syria. His lawyer appealed against the sentence on appeal. Shortly before the sentence was Dündar target of a failed assassination attempt; he was shot by a man who his own words 'if not'.

Dündar early July announced that he would stay elsewhere in Europe for a long time and somebody else's job as chief editor until'd observe. Now he writes that he is not quite walking out and temporarily return to Turkey. Where he is, is not known.


After the failed coup in Turkey Dündar has lost his confidence in the judiciary, he writes. Since the coup attempt, President Erdogan thousands of judges dismissed that offend him.