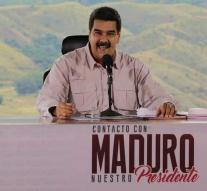 caracas - The talks between government and opposition to defuse the political crisis in Venezuela, still. According to the opposition is 'dialogue frozen' because the government delegation did not show up at two scheduled meetings. Opposition leader Jesus Torrealba accuses the government of President Nicolás Maduro irresponsible behavior.

Activists put a link to a heated debate in parliament about the narco cousins', as an opposition member said the two cousins ​​of Maduro's woman recently convicted in the US for their attempt at large-scale drug trafficking.

Led by an envoy from the Vatican to try the camps for several weeks to come closer to each other. Venezuela is struggling with a deep economic crisis, which is partly caused by the relatively low price of oil. The opposition opposes the economic failure of the government, accusing the president of authoritarianism well.