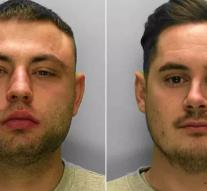 london - Two gun smugglers have been convicted in Britain for years of cell punishment. The duo used powerful magnets to use two automatic firearms and a gun at the bottom of a bus with tourists.

That probably happened in Belgium. The bus was also provided with a tracker. Thus the gunsmiths could follow their rifles while the bus drove to a depot in Coventry. The men picked up the weapons with a van, but they were then intercepted by the police. The British smugglers already had the smugglers.

One of the men was given 16 years of cell, his handler disappeared 12 years behind the bars. The OM claimed the duo claimed that their smuggling was life-threatening. 'They used a tourist bus trip to smuggle deadly weapons into the country,' said an OM spokesperson.