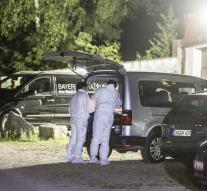 arnschwang - The man who killed a five-year-old child in a refugee center in the German town of Arnschwang was a convicted offender wearing an electronic ankle band. That was announced in a joint statement by the Public Prosecutor of Regensburg and the Oberpfalz police on Monday.

The background of his deed is unclear. The 47-year-old mother of the boy was seriously injured and can not be heard yet.

The district authorities indicated that the man, 41, who died on Saturday by a police bullet, should actually be deployed to Afghanistan. He successfully objected to it in 2014 because he, as a Christian, would not be certain of his life in his native country.

The Afghan was registered as a diligent asylum seeker in Germany. In October 2009, he received a jail sentence of five years and ten months in Munich because of fire fights. At the beginning of 2015 he came free and ended up with a mandatory ankle in the Arnschwang reception center.