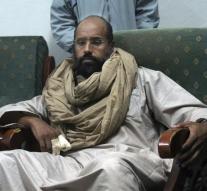 the hague - The International Criminal Court (ICC) in The Hague wants Saif al-Islam to be arrested and handed over to the court. The son of ex-dictator Muammar Kaddafi of Libya, benefited from a parliamentary amnesty regime and was released in prison in Libya.

In June 2011, the Criminal Court issued an arrest warrant against Saif for crimes against humanity, murder and prosecution. It is the assassination assassination when the Caddafi in 2011 tried to beat the Arab Spring in their country.

In a statement Wednesday, the Criminal Court calls, inter alia, Libya and the UN Security Council to provide information on the place of residence of Kaddafi to arrest him.