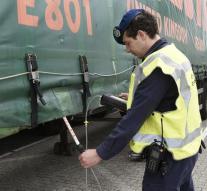 brussels - Twelve human traffickers were sentenced by a Belgian court to Wednesday three to eight-year sentence sentences. The twelve also received fines between 480,000 and 2.1 million euros.

The court imposed a fine of 6,000 euros, multiplied by the number of asylum seekers they had smuggled. The chance that the convicted people will ever pay these money is almost zero.

The twelve suspects, eleven Syrians and one Kuwaiti, belonged to two related gangs. In the so-called 'jungle' of Calais, the refugee camp near the north French port city, they ransacked asylum seekers and they traveled to Belgium by train.

From there, they tried to hide their victims in refrigerators and lorries that were moving to Great Britain. To make the crossing, the victims had to pay between 1. 500 and 2. 500 euros. In this way, the twelve would have smuggled a few hundred people between the end of 2015 and the beginning of 2016 when one of the transports was discovered.